Although most sunstones have yellow, orange, or brown bodycolor, not all sunstones are aventurescent. The appearance of the phenomenon depends upon the size of the inclusions. Small inclusions create a reddish or golden sheen on top of any bodycolor. Larger inclusions create attractive, glittery reflections. Sunstone inclusions can be hematite, copper, or some other mineral. 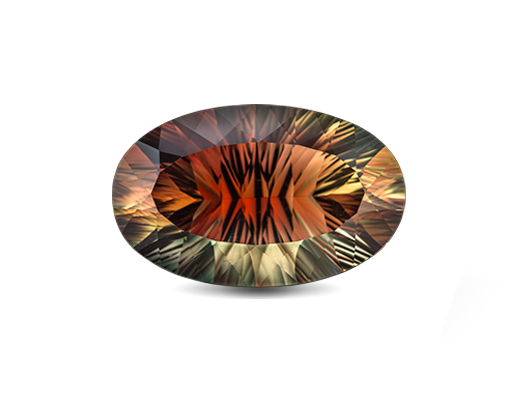 In the early 1800s, sunstone was a little-known, rare and costly gemstone. It wasn’t until finds in Norway, Siberia, and other parts of the world that sunstone became somewhat more widely recognized, more available, and less expensive. In the US state of Oregon in the early 1900s, there were reports of sunstone finds in ancient lava fields in a desert area called Warner Valley. Even earlier, Native Americans in that area might have been the first collectors of Warner Valley sunstones.

According to Native American legend, the blood of a great warrior – wounded by an arrow - dropped onto pieces of Oregon sunstone. The blood carried his warrior spirit into the stones, coloring them with shades of red and giving them sacred power. A museum in Jacksonville, Oregon, includes sunstones in its display of Indian artifacts. In Oregon today, several mining claims produce enough of this unique material to supply mass marketers as well as carvers and high-end jewelry designers.