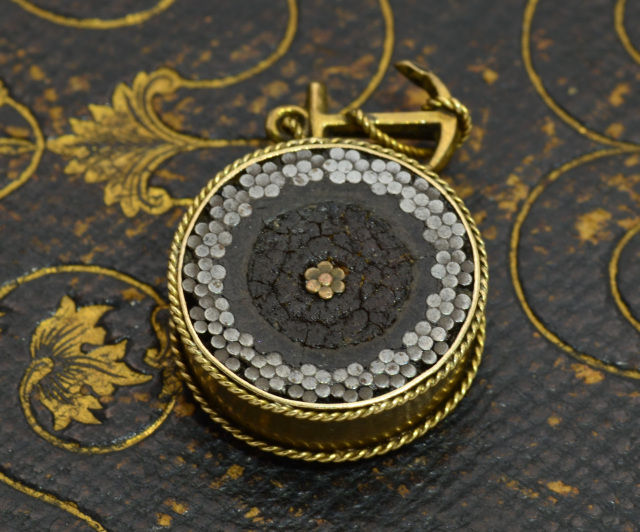 Rare antique gold pendant featuring a section of the Transatlantic Cable. This original pendant which is crafted in yellow gold features an anchor shaped bail on top in perfect placement for the addition of a gold chain. On the reverse side of the pendant is beautifully detailed hand engraving of the original sailing ships used to lay the cable. This pendant is circa 1857 to 1858, at the time the cable was first laid under the ocean. It is an immensely important piece of World history and the advances in communication. Isaac Toucey Secretary of the Navy under President James Buchanan who received the first transatlantic telegraph in 1858 from Queen Victoria was said to have received this as a gift from Her Majesty. On the reverse a hand engraved image depicts the U.S.S. Niagara which helped lay the cable.

A transatlantic telegraph cable is an undersea cable running under the Atlantic Ocean used for telegraph communications. The first was laid across the floor of the Atlantic from Telegraph Field, Foilhommerum Bay, Valentia Island in western Ireland to Heart's Content in eastern Newfoundland. Eventually the transatlantic cable reached from North America and Queen Victoria sent the first ever transatlantic telegraph to President James Buchanan. The second telegraph was sent to the Presidents his summer residence in Pennsylvania which expressed a hope that telegraphs would prove "an additional link between the nations whose friendship is founded on their common interest and reciprocal esteem." The President responded that, "it is a triumph more glorious, because far more useful to mankind, than was ever won by conqueror on the field of battle. May the Atlantic telegraph, under the blessing of Heaven, prove to be a bond of perpetual peace and friendship between the kindred nations, and an instrument destined by Divine Providence to diffuse religion, civilization, liberty, and law throughout the world."

Engraved on the reverse is the U.S.S. Niagara which helped lay the cable

This is an amazing piece of British and United States history and the history of communication.