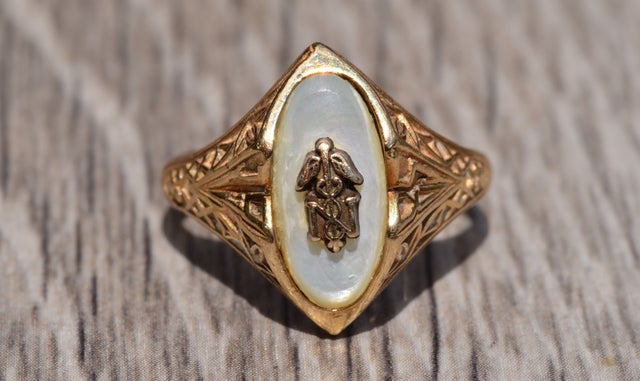 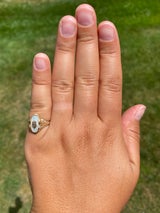 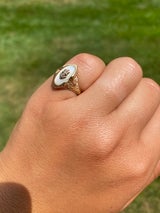 The Enferma: Antique Nursing Ring Featuring Mother of Pearl. The ring features a caduceus or asclepius symbol atop a piece of oval shaped mother of pearl. An Art Deco design completes the look embossed into the side of the shank. The ring is crafted in 14 karat yellow gold and is currently a finger size 5 3/4 yet can be adjusted to any finger size.

The nursing symbol, originally known as the Caduceus is a staff that was according to legend carried by the roman god messenger Hermes. This staff was topped with a pair of wings and had two winding serpents around it. It was a symbol of fertility, wisdom, and was also a symbol of the sun gods. Carried by Greek heralds and ambassadors, this staff was meant as a symbol of neutrality pertaining to the Romans.

The registered nurse symbol, or caduceus, is much used for this purpose much like any other symbol would be used for services such as the Postal Service, commerce or ambassador positions. Since the 16th Century it has replaced the Asclepius one serpent symbol as the image of choice for medicine.