Diamonds have captivated us for centuries with an almost mythic status.  There are many factors that are critical in selecting the right diamond.  These factors, the 4 C's, as they have come to be known, help you compare "apples to apples" so to speak. 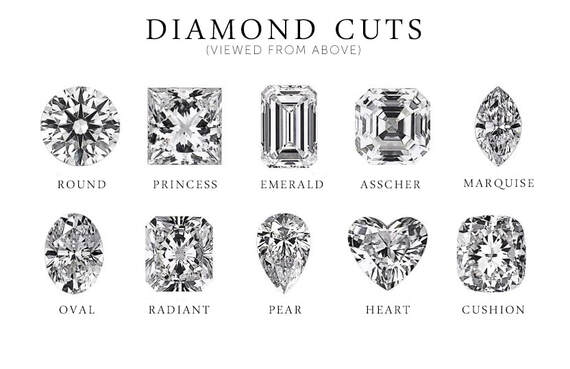 the Evolution of the Brilliant Cut Diamond

In the Beginning
The first diamonds were found in India. They were considered sacred objects that were believed to have possessed magical powers. Originally these stones were left raw and uncut.  In the 11th century were diamonds began to be worn in jewelry but still in an uncut form. Diamond cutting began in the 14th century and were basically cleaved to into a point on top to show some of the life within the stone.  The generally left and featuring the original shape of the rough stone. By the beginning of the 15th century point cut diamonds had advanced and not just the top of the stone was polished.

Evolution of the Table Cuts & Single Cuts
The table cut was the first major faceting technique to be used. By the middle of the 15th century, a little less than one half of the original octahedron would be sawn off, this created a polished surface on both the top and bottom of the diamond.  Since the stone now had a different shape than the point cut or evolved rose cut, and had a flat top it became known as the table cut.  This also lead to the discovery of having a culet (the bottom most part of a typical diamond).  With the introduction of a completely polished stone more brilliance and fire was displayed.  This table cut also revealed another cut, the single cut.

The Rose cut
In the 16th century diamond cutters began to create tools to cut facets. This lead way to improved technology which mean a new version of the table cut, the rose cut.  This was less crude than the original stones, it featured more facets and created more sparkle. Like the table cut, other cutters began to explore better shaped single cuts and started to transition these stones.  At this time, early bruting, faceting, and polishing of diamonds began in Europe.
Until this time most of the diamond trade took place in India, their original place of discovery. European cutters began to transition these cuts.  As cutting techniques matured, diamond demand grew but supply did not.  It was not until the discovery of African mines in the late 19th century that even more developments of cut, and cutting techniques took place.
Rose cut diamonds improved further to a twenty-four (24) facet stone in antwerp and facets began to be triangular in shape.  These stones also began to become more symmetrical than the ones being cut in Indian.  European cutters pushed further on the demand of Royalty. This simultaneously lead to the development of the briolette cut which also had polish on all sides of the stone but was more bead in shape than the flat bottom of the rose cut.
​
The Birth of Old Mine Cut diamonds
By the 17th century cutters took the early single cut which was not developed as the early table cut was and began to change the look of diamonds.  Venetian cutters began to add more facets to single cuts and polish the entire surface of the stone (with the exception of the girdle as technology was not there yet) they added the triangular facets creating the Mazarin cut and peruzzi cut.  These were more squarish/ cushiony in shape as the technology to round was no there yet.  The early 18th century saw a rise of diamond production in Brazil and the coming of new rounded or cushion shaped diamonds. These new more cushiony and near rounded stones changed cutting again to become known as old mine cut diamonds.  These are the cornerstone of the modern round brilliant cut diamond.   Developed in 18th century Europe, these cuts were not round but had a slightly curved edge which formed a soft cushiony square. They were made with a variety of facet patterns but always with a small table, high crown, and larger culet, giving them an architectural look. This also lead to other shapes like the navel cut (marquise cut) which left original rough and changed the outside shape of the stone.

Old European cut Diamonds
The invention of the bruting machine, a steam-driven machine, and motorized saw in the late 1800s revolutionized diamond cutting. These tools enabled cutters to precisely shape rounder and more brilliant diamonds. This allowed expert cutters to create a new cut, the Old European cut diamond.  These stones are more round than the cushiony shape of the Old Mine cut diamonds.  They also have a shallower crown and different arrangement of facets.  Then, in the mid 19th century the diamond rush began with the discovery mines in South Africa. This new supply helped the ancient craft of diamond cutting to emerge as a modern industry.

The Brilliant Cut
Around 1919 Marcel Tolkowsky began to use mathematical formulas to calculate the brilliance of European cut stones and created the first ever Round Brilliant Cut.  During this time other cutters were pushing forward with other shapes as well. The birth of The asscher cut, emerald cut, and ovals began to move forward in production.  Demand for the new ‘round’ cut diamond soared as light return from these stones was never seen like this before.

Changes in cutting
As demand for stones increased, so did the demand for other cuts. So the Asscher, and emerald cut were born replacing the step cut and table cut diamonds.  These cuts also developed the baguette cut.   In the 1920’s the asscher began to gain in popularity and emerald cuts trailed behind until the shape was more standardized in the 1940s. The step cut emerged as one of the first faceted diamond cuts, third in line after the point cut and the table cut. These step cut stones were perfect for those looking for something a little different than the brilliant cut.  These cuts along with other developments helped lead way for the marquise, oval cut, heart cut, and princess cut along with many other cuts.
Clarity Enhanced Diamonds
A CE diamond (Clarity Enhanced) is a 100% genuine natural diamond.  The enhancing process seeks to correct small internal blemishes and tiny surface reaching cracks that all diamonds possess to a certain grade.  These fissures are filled with a lead/glass mixture to create the appearance of a much cleaner stone.  Clarity enhanced diamonds are much lower in price than non-enhanced diamonds, and the process of clarity enhancing a stone is not permanent.
Synthetic Diamonds
A synthetic diamond is the result of a technological process (made in a laboratory), as opposed to the geological process (made underground) that creates natural diamonds. Synthetic diamonds have essentially the same chemical composition, crystal structure, optical, and physical properties of natural diamonds. Most synthetic diamonds are categorized as either high-pressure, high-temperature (HPHT) or chemical vapor deposition (CVD) diamonds, depending on the method of their production.   The cost and rarity of man made diamonds is much less than that of rare natural diamonds.
It is important to know that ALL lab-created diamonds are color-enhanced. Natural diamonds can also be color-enhanced, but that must be fully disclosed when they are sold because it dramatically lowers their value. It is currently not being disclosed with lab-grown gems.
What about future value of synthetic diamonds? Since the 1880’s, when they were discovered in South Africa, diamonds have seen heightened demand and become our greatest symbol and icon of enduring love. Real diamond supply has depleted while the value of gem quality diamonds has steadily increased.
Since the appearance of synthetics on the market, their value has steadily decreased. Largely due to mechanical reproduction (cloning) and declining costs of technology in the foreseeable future, synthetics will be neither rare nor unique and their value will plummet.
​

Grading Services and Certifications
Selecting a diamond that is graded (or certified) by an independent organization is an extremely important factor in buying a diamond.  This helps to insure that the grade of the diamond being sold is actually the grade of the diamond and helps to hold grading standards true.  Here at Timberbrook, we ONLY offer diamonds graded by The Gemological Institute of America or GIA as it is abbreviated.  GIA is the worlds foremost authority in gemology and has, in our opinion, the strictest grading standards in the industry.  This allows apples to be compared to apples so to speak.  GIA graded diamonds can be bought and sold by our company representatives without ever seeing the diamond as we are confident in the grading standards and practices of GIA.  There are many other grading companies in the world, however Timberbrook feels that using the foremost authority in gemology is the standard by which we want to be held.
FOR MORE INFORMATION ON DIAMONDS CONTACT US DIRECTLY!